The COVID 19 virus has had a tremendous impact on small producers and workers around the world. For updates, visit Fairtrade Canada at https://covid19.fairtrade.ca/en and Fairtrade International at https://www.fairtrade.net/about/fairtradetogether-covid-19-updates. For our part, we are trying to support our suppliers as we can while ensuring we take appropriate measures locally.
‍
‍KEEP APART, STAY UNITED.

No items in your cart
Product is not available in this quantity.

No items found.
Product is not available in this quantity.

What is Fairtrade certification? 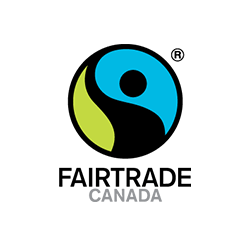 Fair Trade is an alternative economic trading system that empowers farmers by promoting long-term contracts and solidarity-based trade relationships, and by ensuring that they are operate through democratically controlled producer organizations. Fair Trade certification also protects small producers from volatile commodity markets by providing a guaranteed minimum price for most products. Finally, Fair Trade provides a social premium (based on the amount of goods that an organization sells) that is used for local, community driven socio-economic development. Fair Trade certification can be identified by the mark above.

What is organic cotton certification?

There many organic certification bodies which certify a wide range of agricultural products. The Global Organic Textile Standard (GOTS) is recognized as the world's leading processing standard for textiles made from organic fibers. It defines high-level environmental criteria along the entire organic textiles supply chain and requires compliance with social criteria as well. Only textile products that contain a minimum of 70% organic fibers can become GOTS certified. All chemical inputs such as dyestuffs and auxiliaries used must meet certain environmental and toxicological criteria. The choice of accessories is limited in accordance with ecological aspects as well. A functional waste water treatment plant is mandatory for any wet-processing unit involved and all processors must comply with minimum social criteria.

What is a co-operative?

Fair Trade vs. Made in Canada

While the issue of whether to support Canadian produced goods vs Fair Trade goods is sometimes raised, in practice it is not really an issue in the case of t-shirts. There are some companies that produce garments in Canada as part of a commitment to maintaining well-paid manufacturing jobs with associated labour rights. Such firms typically only compete in higher-end niche market sectors. The bulk of garment production, especially in lower priced products such as t-shirts, has moved to countries like China, India, and Bangladesh in recent decades. In these emerging markets, most brands are attracted to low prices and less stringent labour regulation. Fair Trade is one concrete way to ensure that workers in these countries receive fair wages and enjoy labour rights, while also providing small producers in these countries a fair price for their cotton along with the other benefits of fair trade relationships.

What are your standard measurements?

What kind of ink do you use?

In our in-house Direct-to-Garment printing, we use Epson UltraChrome DG ink. This ink has passed the Oeko-Tex Standard 100 specification for human and ecological requirements for class 1 products. It is water-based. Direct to garment printing, is one of the most efficient ways to use ink.

Are your shirts vegan?

Yes, ours cotton t-shirts, like most cotton t-shirts are vegan. It is true, however, that historically cotton products have not been very sustainable. Indeed, cotton is the crop that annually accounts for the highest amount of chemical pesticide and insecticide application in the world! That's why we buy only organic certified garments from our suppliers.

Learn more about us

Fair Trade is an important part of our business, and will lead to a more equitable future for everyone.
LEARN MORE →

Our board of directors work directly with our partners, suppliers, and customers. See who's behind the company.
LEARN MORE →

Learn about our origins, mission, and our greater impact on the industry.
LEARN MORE →